If you have been to Bermuda, you may or may not have noticed some of our curious creatures come out to play; including the many lizards that make Bermuda their home.

The Bermuda Skink (Plestiodon longirostris) is one of the rarest lizards in the world. Adult males and females have shiny brown or black body scales, a pale belly and an orange throat patch. They can grow up to 8 inches long. Juveniles have coppery scales, a pale belly, and have black and cream coloured stripes running down both sides of their body. Baby skinks have bright blue tails, which they use to confuse predators (who bite the tail instead of their head). The skink then escapes and grows a new tail.

Skinks usually stay on the ground or crawl up onto rocks to bathe in the sun, and are found living in small patches all over Bermuda on the rocky shorelines as well as on small islands. While the total island’s population of skinks is unknown, most live in Spittal Pond Nature Reserve and on the Castle Harbour Islands. If you see a skink you can report it by contacting the Department of Conservation Services.

Bermuda Skinks are considered critically endangered and face many threats. Loss of natural habitat through building and development, predation from rats, cats and kiskadees, and entrapment in litter (like glass bottles) all affect the survival of our skinks. The Bermuda Skink is protected under the Bermuda Protected Species Act 2003.

There are 4 species of small lizards in Bermuda. One is endemic; the Bermuda Skink, and the other 3 are introduced species of Anoles (Anolis sp.). Anolis lizards have a retractable fan (called a dewlap) which the males extend from a throat pouch during courtship or territorial displays. They differ from our Bermuda Skink in that they have feet that are specialised for climbing. The Anoles are all naturalised (introduced by man, but breed locally), and have established self-sustaining populations in Bermuda. There has also been recent evidence that geckos have become resident in some parts of the island.

The Jamaican Anole is the most frequently seen of

Bermuda’s lizards. The male can reach up to 8 inches long. He is bluish green with blue hind legs and a purple tail, but they change colour rapidly and may be dark brown, almost black. The brown version of the Anole is totally brown, unlike the Bermuda Skink which has a coppery orange head. The male Jamaican Anole also has a bright orange extendable throat fan. The female is 4-5 inches long and is greenish grey or light grey.

The Antiguan Anole is commonly referred to in Bermuda as the Warwick Lizard because it was most commonly seen in Warwick and Paget, but today can be seen in most parts of the island. This lizard is native to Antigua and Barbuda and arrived in Bermuda by accident probably in the 1940s. 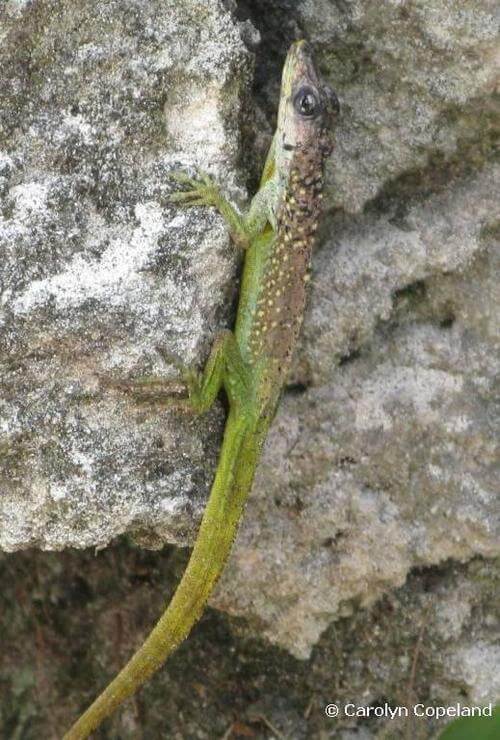 This lizard is often referred to by Bermudians as the Somerset Lizard. It is only found in the West End in Sandys parish. This lizard is native to Barbados and likely arrived by accident in the 1940’s onboard ships arriving at the Dockyard.

This information was obtained from the Bermuda Department of Environment and Natural Resources.