Where the Drone Flys – Bermuda Aerialography with Andrew Stevenson

Where the Drone Flys 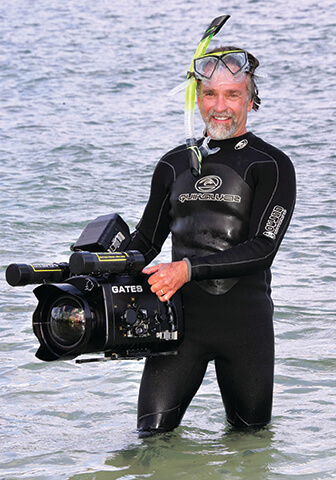 “It’s almost impossible to fly drones in Bermuda legally, because you have to be so far from everyone else,” says Andrew Stevenson, a Bermuda-based whale researcher and aerial photographer. He is no amateur at flying aircrafts, having owned a Cessna 182 in his early twenties. Andrew actually obtained his commercial pilot’s license over 30 years ago, but these days flying his drone out at sea, where it’s remote enough to not get him in any legal trouble, is both challenging, and satisfying enough.

“On the boat there’s not much landing room. Maybe 6 inches all around, certainly not more than a foot,” he told Candice and I, as we met him at his Fairylands abode. One false move and the drone would be destroyed if it landed in the water by mistake. He continues to explain the many hiccups of mastering this new hobby (he now has a commercial license to fly an unmanned aircraft in Bermuda) while leading us through the backyard and down to a private dock where his boat, used for drone launching and whale watching, lies in wait.

There are a number of clues around the home hinting that its residents love the ocean. The coffee mug he drinks from has a whale on it, old whalebones lay on the dock, and even the family dog doesn’t need an invitation to jump in the water for a swim as she pleases. We all take a seat at the picnic table. Even in the beginning of October, the sun is shining brilliantly, birds are chirping and the water is clear as can be.

“It’s beautiful right? Where else in the world can you live like this?” asks Andrew rhetorically. And he would know. He’s both British and Canadian, and has travelled the world extensively throughout his life. Before meeting his “Kiwi wife and turning Family man”, he’s had many international adventures and lived in exotic locations such as Tanzania, Nepal, Singapore, India and Hong Kong to name but a few.

“I’ve always had an interest in nature, outdoors, animals, wildlife, but unfortunately I was really good at economics, and my first two jobs were with banks, and I hated that.” he admits in retrospect. Leaving the financial world in search of his true calling was the best decision he could have possibly made those many years ago.

Apparently ageless, he’s already a living legend, having published some 11 books (including 7 travelogues, and 2 photography books) and has independently produced two documentary films. But that’s just the tangible stuff. His is one of those stories of an almost spiritual transformation; how one epic experience can change the entire course of a man’s purpose and direction in life.

For him, that experience was 10 years ago, when he had his first encounter with a humpback whale in the wild. One day, near Challenger Bank (about 12 miles off the island), he was in the water with a pod of dolphins when the gentle giant he calls “Magical Whale” swam right up to him, literally out of the blue. “I couldn’t talk about it for a month without crying. My wife’s a doctor and she had to prescribe me sleeping pills because I couldn’t sleep for a week, I just kept thinking; What was that whale thinking? Because he came right up to me, his nose was right there.” Andrew reflects, still puzzled at the thought. The encounter is documented in Where the Wales Sing, the international award-winning documentary he single-handedly filmed, directed edited and produced in 2010. It was the first ever film to win the esteemed local art competition, the Charman Prize, held annually by Masterworks Museum.

Since then, what began as an “intellectual challenge” has become a full-time commitment for Andrew who has dedicated the last 10 years of his life to researching the activities of humpback whales as they pass through Bermuda’s waters en route to the North. “Now every year I have encounters like that and I don’t get so emotional”, he continues. He’s developed a real bond with the animals over the years and often encounters the same whales on different occasions. By their unique tale flukes – similar to a human fingerprint – he’s able to identify them, and has found and photographed over 1,250 whales, in under a decade.

“I probably have the biggest catalogue of whale IDs photographed by one person anywhere in the world. But what makes this catalogue unique is it’s the only one done in the middle of the ocean.” He explained to us that while researchers have been collecting data for decades already, what the whales do in the waters surrounding Bermuda still remains a mystery to many of the world’s top whale scientists.

“The aerial stuff on the whales has just opened up huge vistas of information,” he says with excitement. With his “flying tripod”, he’s been able to capture fascinating aerial footage of the whales’ social activity in the Mid-Atlantic. This information is of huge interest to both local and international scientists, as Andrew firmly believes; “I think that if anywhere we’re going to unlock the secrets of their lives, it’s here in Bermuda.” Andrew is using his aerial footage to produce a sequel to Where the Whales Sing, and has been invited to give a presentation on his findings at BUEI on November 7th.

to learn more about his work, or to find out how you can help.

Where the Drone Flys – Bermuda Aerialography with Andrew Stevenson