Seven years ago, the then Bermuda Maritime Museum, with the kind permission of the West End Development Corporation (WEDCO) and its Chairman (later a Minister of the Bermuda Government), Lt. Col. David Burch, OBE, JP, ED, began a project of pre-restoration work at the historic Casemates Barracks, at the western end of the old Royal Naval Dockyard at Ireland Island. On behalf of the Trustees and Staff of what is now the National Museum of Bermuda, I thank that former commander of the Bermuda Regiment, WEDCO, and the donors and many volunteers who have contributed to the Casemates project over the last six years. You have all put the historic barracks area back on the heritage map, in ways not anticipated when we set out on what has proved to be an epic voyage.

The original concept was that the Casemate Barracks, including its two ancillary ordnance buildings and the adjacent Land Front fortifications should be cleared of trees, debris and the concrete remains of Bermuda’s maximum security prison for men, a function the historic district served from 1963 until September 1994, when the Westgate Correctional Facility was built near the Dockyard. Much of such labour is handwork and thus has been performed by a myriad of volunteers, many from corporate “Days of Giving”, such as XL Capital (one of the first), Tokio Millennium Re and Kitson’s.

As the project evolved, people asked about the end product and the original concept was explained, but one day someone suggested that we should connect the Casemates area with the Bermuda Maritime Museum in the Keep at the eastern end of the Dockyard. Hence, the concept of the project changed and the idea of rejoining Casemates to the Keep (an historic reality, as the road to the Commissioner’s House passed up by the Barracks and down the long rampart on the northern side of Dockyard) took on steam. With that rejoining concept, which drew all the surviving fortifications of the Dockyard (and the historic buildings within) back under the same umbrella, or command, if you think militarily, the notion of the transition of a maritime museum to being the national museum of Bermuda emerged.

The Cabinet of the Bermuda Government approved the idea in July 2009, following which the new ship of state had to follow a lengthy path to make the concept a reality. In December 2013, His Excellency the Governor of Bermuda, Mr. George Fergusson, gave assent to “The Bermuda Maritime Museum Association Amendment Act 2013” that officially changed the name of the museum to the “National Museum of Bermuda”.

Subsequently on 23 May 2014, leave was given by the House of Assembly to WEDCO to grant a 99-year lease, on a peppercorn (cannonball) rent, to the National Museum for the surviving 15.78 acres of the Dockyard fortifications, from Commissioner’s House in the east to Casemate Barracks in the west, to name but two of the very significant hard Bermuda limestone buildings within. So congratulations to all the volunteers, donors, official entities and others, who have banded together over the last seven years to save the Casemates area and to create the National Museum of Bermuda. 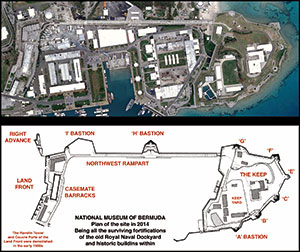 Courtesy of the Ministry of Public Works, the upper image is a recent aerial photograph showing the grounds of the National Museum surrounding the old Royal Naval Dockyard on three sides. The lower image is a cutout of the 16 acres of the Museum with some of the features of the fortifications named, along with the Casemate Barracks.