Bermuda cuisine is often superb in taste and texture. But they are for those who do not have to watch their weight or calorie or cholesterol count!

Note that “Bermuda cuisine” really means how the food is prepared or served, unlike in most other countries where it is also caught or grown or distilled or manufactured. Not many local websites will tell visitors and newcomers to note that almost all Bermuda cuisine and other cuisines are imported and that almost all food including restaurant food sold in Bermuda comes from overseas, mostly from the USA, and is resold here at prices often very appreciably more expensive than restaurants in the USA. After March, local lobster, very expensive by American standards – especially in MA, ME, CT, MD, RI and SC – is not available until at least the fall. At other times of the year, if lobster is on the menu, it will be Maine or Canadian lobster.

There are no local kosher foods. Books on Bermuda Cuisine include:

– Bermuda Cookbook (The). By Cecile C. Snaith.
– Bermuda Cookery. Bermuda Junior Service League (BJSL), a women’s volunteer organization dedicated to improving the local community. Bermuda cuisine and culture. Sold a quarter of a million copies over a period of three decades. BJSL used the funds from the first book to run the Deliverance in St. George’s for twenty years, and build a playground and a rape crisis centre, among other projects.
– Bermuda Traditions. 2009. Veteran Bermudian chef Fred Ming.
– Bermuda Traditions and Tastes. Judith Wadson. 1997. Origin of Island holidays and their cuisine. 48 pages. $15
– Home Made Cooking Good ‘Nuff for Sharing. Compiled by Vernon Temple AME Church.
– Island Thyme, Tastes and Traditions of Bermuda. 2004. $37.95. Much bigger successor of Bermuda Cookery. Bermuda Junior Service League (BJSL). Bermuda cuisine and culture. 256 pages with more than 200 recipes and colour photos of Bermuda cooking, traditions and celebrations. Published in the USA by The Cookbook Marketplace.
– Sundays with Codfish and Potatoes. 2002. By UK-born Chef Mathew Line who then lived and worked in Bermuda.
– Tastes of Bermuda. 1996. Ed Bottone. $9.95. Author is “The Curious Cook” food writer and cook. A gastronomic tour of his favorite restaurants and Pubs.
– Traditional Bermuda Recipes. The Sunshine League. 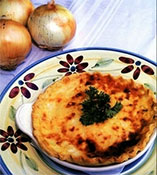 Rum Swizzle. The rum of the rum swizzle is not distilled here. Rum Swizzle ingredients include 6 ounces of imported black rum, 6 ounces of another lighter rum, 1 ounce of imported apricot brandy, juice of four local or imported limes or lemons, 1.5 ounces of local or imported honey and 4 dashes of bitters imported from Trinidad and Tobago.
Shandy. A British style drink, popular with British expatriates, originating from the UK. It is made from imported lager beer and ginger beer or lemonade in quantities to suit individual tastes. If you do not like ginger beer, Sprite will do. (In the UK, you can buy already-mixed shandy from all supermarkets for about 45p a 2-litre bottle).
Shark fritters or hash. Sharks are common beyond Bermuda’s reefs and are a favorite of some Bermudians, as shark fritters or shark hash.
Shrub. A drink made from Bermuda sour oranges, lemons and rum liqueur.
Snapper. Baked red snapper is a choice dish when caught in Bermuda waters.
Stonehole Stew. So-called as it originated at Stonehole Bay, South Shore, off South Road, west of Warwick Long Bay, located between Chaplin Bay and Jobson’s Cove, at the extreme western end of Warwick parish. It is one of the prettiest of all Bermuda’s south shore coves. The beach is so-called because of a gaping hole in a cliff-top coral formation that gives the stunning natural stone frame view. Directly north of it on the land side of the South Road is the former British Army’s Warwick Camp (later taken over by the Bermuda Regiment), for many years it was a favorite haunt of British Army regiments once quartered there in whole or in part. And because of this, they originally devised what later became known as Stonehole Stew, in commemoration of the beach. This unique stew was a culinary mix of initially British Army later civilian locally grown pumpkins, white or red and sweet potatoes, onions and salted imported beef traditionally cooked on camp fires in a three-legged iron pot.
Sweet potato pudding. Made from local sweet potatoes which are a light green compared to orange yams from overseas. It can be served with lunch or dinner. When fireworks were legal in Bermuda on November 5 – for what in the United Kingdom is still Guy Fawke’s Day – it was served with cedar berry beer.
Syllabub. A monster of a dessert made in Bermuda with layers of guava jelly, thick cream and sherry. Yes, guavas can be grown successfully in Bermuda! Syllabub is originally English, dating back to the days of King Henry VIII, if not before.
Tea. Mostly prepared the American way, in tea bags, not surprising considering 85% of all visitors are American, only 5% British UK nationals – not the British way, in tea pots and with leaf tea. Tea is not grown in Bermuda and the only imported tea available is for American palates. Britons should bring in stronger tea made for British markets. Green tea – American or Asian or Indian – is said to be an anti-oxidant, good for those with a cholesterol problem.
Turbot Stew. Another interesting local seafood dish.
Wahoo. Since 1609, this has been the name of a species of game fish still caught in local waters (but not solely). It is a distinctive Bermudian dish, expensive. David Letterman and Wahoo in Nebraska made the name popular in the USA. One good dish is a wahoo salad which will serve a family of four, is nutritious, delicious and healthy. Its ingredients are two carrots, two ounces pickled ginger, a handful of dry cranberries, one bag arugula, one lemon, one lime, six to eight ounces wahoo, two tablespoons virgin olive oil, a dash of rice vinegar or cider vinegar, dash of salt and pepper, soy sauce for dipping. Thinly slice the carrots and toss in the dash of rice vinegar or cider vinegar. Put the arugula in a mixing bowl with the dash of salt and pepper and add the olive oil, cranberries, ginger and juice and a bit of zest from the lemon and lime. Toss it and plate it. Slice the fish. Add it to the plates raw, sear it for 30 seconds to a minute on each side for medium rare, or longer for personal preference.