Building of the Deliverance

Do you know… About the Building of  the Deliverance? 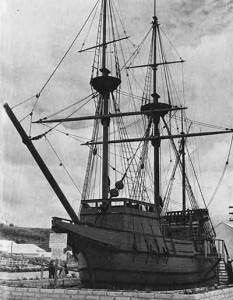 On August 28th 1609 – a month and a day after the wreck of the Sea Venture – the keel was laid for a new ship to take the survivors to Virginia. With the Sea Venture still high on the reefs, most of the material for the new ship was salvaged from her. On March 30th 1610 the new ship was towed to the water where William Strachy wrote “When she began to swim upon her launching, our Governor called her The Deliverance.” Meanwhile Sir George Somers decided to build a second, smaller, ship and called her The Patience.

On May 10th 1610 both ships were ready and set sail for Virginia, laden with salted pork and other supplies from Bermuda. On reaching Jamestown thirteen days later they were shocked at the condition of the few colonists who had survived the previous winter. On the other hand the remaining 60 Virginians must have been amazed at the excellent condition of the 150 new arrivals they had believed lost almost a year ago.

Given the dire conditions in Virginia, Sir George Somers volunteered to sail back to Bermuda in The Patience and return with a cargo of hogs and other foods which were plentiful in Bermuda. Unfortunately he again ran into bad weather and after arriving in Bermuda several weeks later, Sir George Somers died of exhaustion.

The Diorama shows great activity in building The Deliverance, which was of great significance in the history of both Bermuda and Virginia.