Do you know…about Geoffrey Osborn

Do you know about Geoffrey Osborn, pilot and philatelist, and the assassination of Reinhard Heydrich? 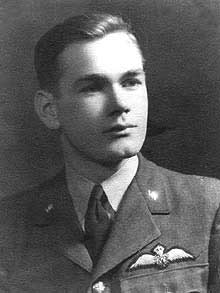 Geoffrey Osborn in the RAF.

Geoffrey Alan Osborn was born on January 24 1922 in Woolston, England and arrived in Bermuda at the age of seven. He was educated at Warwick Academy and in 1938 joined the Bermuda Volunteer Rifle Corps. He learned to fly at the Bermuda Flying School at Darrell’s Island in 1940, receiving Pilot’s Licence #4.

He soon joined No. 51 Squadron of the Royal Air Force and, in November 1942, fifteen minutes after taking off in a twin-engine Whitley bomber, an engine failed and Geoff was forced to land in a field, with the bomber catching fire. Having been thrown clear of the aircraft, he managed to rescue the observer, sustaining serious burns himself.

After joining Special Duties 161 Squadron, Geoff flew long-range sorties to drop supplies and agents to the Resistance in France, Belgium and Czechoslovakia in support of SOE operations. In March 1943 his Halifax bomber crashed soon after take-off, killing two crew members and trapping four others. Ignoring exploding ammunition, Geoff managed to drag them to safety, seriously burning his arms and face. For these acts of gallantry he was awarded the George Medal – the 2nd highest award for conduct that is not in the face of the enemy – by King George VI.

During a reunion at his airfield several years after the war, Geoff and his war-time dispatcher were comparing their old log books (pilots were never given operational details at the time in case of capture), Geoff found out that when dropping a number of Czech paratroopers near Prague in December 1941, two of them were part of ‘Operation Anthropoid’, code name for the planned assassination of SS-Obergruppenführer Reinhard Heydrich. After much planning, the attack was carried out in Prague on May 27th, 1942, and although only wounded, Heydrich died of his injuries a week later, resulting in merciless reprisals by German SS troops.

After working as air traffic controller in Northern Rhodesia, Germany and England after the war, Geoff Osborn returned to Bermuda in 1966 to join the Department of Civil Aviation, subsequently becoming Permanent Secretary for Transport. Apart from his interest in aviation, Geoff was an internationally noted stamp and postal history collector, contributing to Morris Ludington’s book ‘The Postal History and Stamps of Bermuda’, co-authoring ‘The Royal Mail Steam Packets to Bermuda & Bahamas’ and writing ‘Naval Officers’ Letters: A Study of Letters Sent to and from British Royal Navy Officers Serving Abroad in the Victorian Era’. Geoff died in 2011.