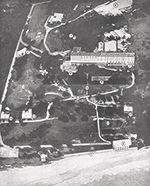 When a wealthy gentleman in the Isle of Man promised each of his grandchildren £1,000 if they left for the other side of the Atlantic to set up their own successful businesses, little did he know that one of them would start what is now the Elbow Beach Resort.

Having had success farming in Canada, Richard Berry Johnson was faced with a dilemma when his wife, for medical reasons, had to move to a warmer climate. Bermuda at that time was considered a retreat for the wealthy in need of rest, especially during the winter months. And so the Johnson family arrived in Bermuda around 1903, so that Eleanor could fully recuperate while her restless husband started to look for a new business venture.

At the time Bermuda had two major hotels – the Hamilton Hotel in the heart of the city and the Princess Hotel just outside of town – as well as smaller hotels and guesthouses primarily in Hamilton. Nobody had considered building a hotel near a beach. Except for Richard Berry Johnson. When he saw the heavily wooded hills overlooking the pristine South Shore in Paget, he immediately felt that this was the ideal spot to build some guesthouses. After purchasing the property he christened it ‘Elba Beach’, possibly thinking of Napoleon’s lonely exile on the island of Elba.

By 1908 R.B. Johnson built three guest cottages near the beach and began construction of what became the South Shore Hotel. The beachfront Pavilion and bathhouses were next with everything completed by 1912 and the Royal Gazette concluding: “The many guests are loud in their praising of the ideal bathing beach and its charming surroundings, and of what promises to be the most popular place on the Island.”

Having established a successful venture in Bermuda, the Johnson family would return to Canada during Bermuda’s off-season in the summer and look after their business interests there. Alan McNicol, manager of the Royal Prince Hotel in Hamilton, now became manager of the South Shore Hotel and with the declining tourist trade during World War I, R.B. Johnson decided to sell the hotel altogether.

Harold Hayes Frith, the new owner, changed the name of the property to Elbow Beach Hotel and embarked on an ambitious programme to expand the hotel. His timing was excellent as the U.S. Prohibition encouraged tourism to Bermuda, the Furness Withy shipping line expanded its services, and the traditional winter destination slowly changing to all-year tourism. Harold Frith’s first project was the addition of a north-west wing and shortly thereafter a new 200-room east wing to the hotel.

With World War II tourism came to an abrupt halt and the Elbow Beach Hotel was fortunate that the U.S. Navy rented most of the hotel to the construction companies building the Navy Operating Base in the Great Sound. Later the hotel became a huge warehouse for the Wartime Supplies Commission where Government stored grain and the foodstuffs which were rationed. Following the war Harold Frith refurbished the hotel but unfortunately his health deteriorated and he was forced to sell the property in 1947.

John Moores, the new owner, added a swimming pool, tennis courts, beachfront cabanas and restaurants and positioned the Elbow Beach Hotel for the coming era of mass tourism. It could now accommodate approximately 400 guests. By the 1970s this increased to around 600, just in time for the coming convention business and the annual College Weeks invasion for which the Elbow Beach Surf Club was Bermuda’s headquarters.

After running the hotel for nearly four decades, the Moores family sold it to Saudi Arabian Prince Khaled Bin Sultan Bin Abdullaziz Al Saud in 1991. After refurbishing the main hotel, expansion plans included a123-suite extension on the west wing and a 20,000-square-foot banquet and convention centre. Additionally the adjoining Frithholme Gardens were purchased to build condominiums. The hotel now had 400 guest rooms and 34 acres .