Hamilton, Bermuda (February 21, 2020)—A new exhibit commemorating the anniversary of a 19th-century court case in which a group of enslaved ship passengers dramatically won their freedom has opened at Bermuda National Library.

The free exhibit was produced by the Department of Libraries & Archives and the Bermuda Tourism Authority (BTA). It uses artifacts and multi-media to tell the story of the American ship Enterprise which reached Bermuda in February 1835 after a storm threw her off her designated journey between Alexandria, Virginia and Charleston, South Carolina. Aboard the vessel were 78 enslaved people, many of them children. But, in a precedent-setting ruling, a Bermuda court freed the ship’s human cargo because slavery had been abolished on the island seven months earlier.

Today, scores of Bermudians can trace their family heritage to the historic milestone 185 years ago.

“The legendary hospitality of Bermudians along with the legacy of our legal system shine through spectacularly in this story, and show Americans another way our two countries are culturally linked,” said Glenn Jones, Chief Experience Development Officer at the BTA. “This milestone anniversary also overlaps perfectly with Black History Month in the United States. Since most of our visitors come from the US, we’re glad to have this new and relevant cultural tourism experience and we appreciate the government’s collaboration.”

Inside the one-room exhibit, a 10-minute excerpt from Bermudian filmmaker Lucinda Spurling’s The Lion and the Mouse documentary explains the story of Enterprise, including how the ship came to land in Bermuda and what local Friendly Societies did to win the freedom of enslaved passengers. Fascinating artifacts from the Bermuda Archives include documents from both the Enterprise and the court case that ultimately set free those in bondage. An enlarged display of the 1835 Royal Gazette coverage of the Enterprise and a photograph of Chesley Trott’s sculpture “We Arrive” are part of the exhibit.

The BTA is promoting the limited-time exhibit at its Hamilton Visitor Services Centre and online via its events calendar. Additionally, a popular Saturday bus tour of black heritage sites recommends the exhibit to customers when the excursion ends a block away from the library. Students from CedarBridge Academy were among the first to experience the new exhibit.

The Enterprise Exhibit is open at the library, on Queen Street, Monday through Saturday until March 31. 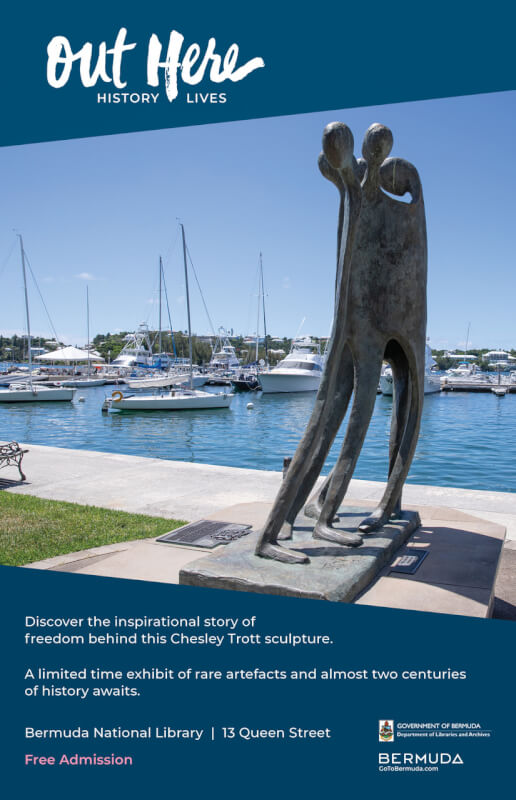