Do You Know about getting around in Bermuda: From Horse-and-Carriages to Automobiles and Trucks?

Do You Know about getting around in Bermuda: From Horse-and-Carriages to Automobiles and Trucks?

When automobiles became popular all over the world at the beginning of the 20th century, a small number were brought to Bermuda. But it was the ‘Scarlet Runner’, a motorized bus that was brought here in 1905 to take visitors to the South Shore, when livery stable owners began a campaign against motorizes vehicles, claiming that they frightened their horses. Bermuda’s Assembly reacted by passing the Motor Car Act of 1905, restricting motor vehicles to no more than 6 mph.

But livery stable operators were not alone in opposing motor vehicles. Wealthy Americans who came to Bermuda to get away from the ‘rapid transit’ of Boston or New York began demanding that motor vehicle be banished from Bermuda. Encouraged by Mark Twain, the future president of the U.S. Woodrow Wilson, drafted a petition, claiming that automobiles were an affront ‘to persons of taste and cultivation’. 111 tourists signed the petition and the Assembly passed the Motor Car Act of 1908, banning motor cars. It remained in force until 1946. 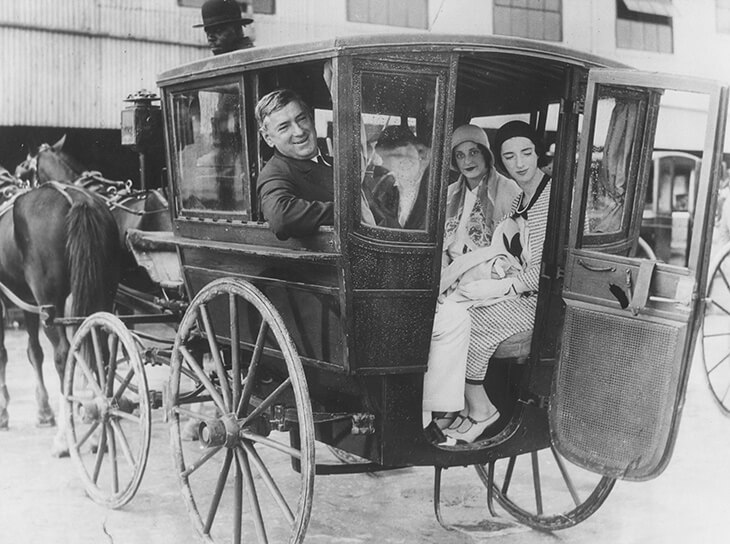 Apart from the Somerset and St. George’s Express, tourists could rent horse-and-carriages. Shown here is Boston’s Mayor James M. Curley with his daughter Mary and her friend Jean Wurtz. James M. Curley was one of the most colorful and probably the most successful politician in Boston’s history and famous for having spent five months of his last term in federal prison following a conviction for mail fraud.

While this did not resolve Bermuda’s transportation needs, the Assembly commissioned a study to see if a railway may be the solution, not just to move passengers and freight, but also to maintain the ban on automobiles. And so the building of the world’s most expensive railway per mile was started in the late 1920s and completed in 1931. Meanwhile exemptions were made to the Motor Car Act with doctors allowed to import cars, as well as ambulances, fire engines and a garbage truck allowed on Bermuda’s roads.

At the outbreak of World War II in 1939 there were 45 motor vehicles in Bermuda, a number that would increase dramatically to 8,490 by 1946. This included 375 private cars, 109 taxis, 380 trucks and 7,363 military vehicles.  One year later most of the service vehicles had been withdrawn, but private cars now numbered 846, taxis 316 and trucks 449 for a total number of 3,176 on Bermuda’s roads, all thanks to the Motor Car Act of 1946, allowing private cars and taxis into Bermuda. 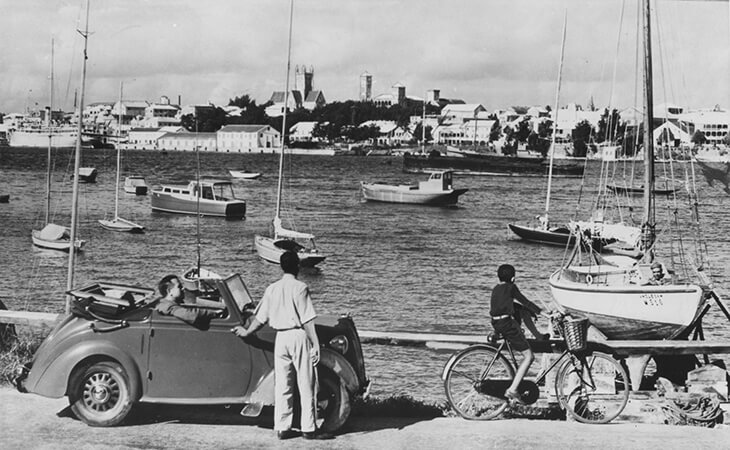 The first private cars appeared on Bermuda’s roads in 1946…

P.S. One gentleman who just could not wait for automobiles to be permitted in Bermuda was John L. Carson. When he arrived in Bermuda in September 1936 to become Manager of the Bermuda News Bureau the only means of travelling to the island were the Furness Liners and the Canadian National ships from New York, Boston and Montreal.

Less than one year later the flying boats of Pan American Airways and Imperial Airways could reach Bermuda in five hours. Perhaps Mr. Carson was hoping that on-island transportation would also change this rapidly, but that did not happen for another ten years. So instead of waiting for the law to change, the enterprising Mr. Carson decided to import a Velo pedal car from France! Here he is showing off Bermuda to Hollywood actress Loretta Young. 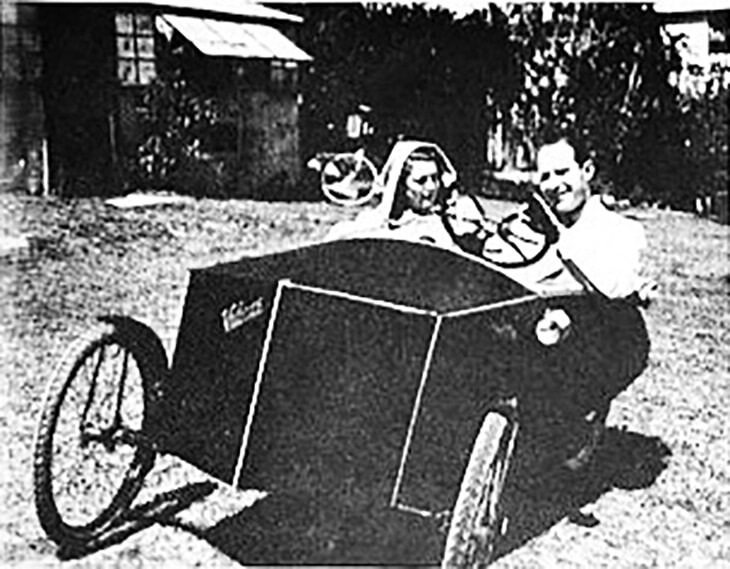 Horst is a passionate philatelist, history buff, collector and author. Originally from Austria, he has been living in Bermuda since 1961 and has published several books on Bermuda’s history, including the series ‘What You May Not Know About Bermuda’, and ‘The Golden Age of Bermuda’s Postcards’. Comments: netlink@link.bm

Page load link
Do You Know about getting around in Bermuda: From Horse-and-Carriages to Automobiles and Trucks?