Purists, whether scientific or culinary, may be horrified to learn that throughout the subtropical western Atlantic this clawless crayfish goes under the name of Lobster…

The local lobster is something of a phenomenon as the following excerpt explains, and this is taken from the publication: Marine Conservation. A Recreational User’s Guide for Bermuda Waters. Department of Agriculture, Fishers and Parks (1990). Purists, whether scientific or culinary, may be horrified to learn that throughout the subtropical western Atlantic this clawless crayfish goes under the name of Lobster. They are technically correct, of course, but since the New England lobster (Homarus americanus) does not occur in Bermuda what can we do but substitute the next best thing? It certainly has the same proportions as its distant relative, and it is so eminently edible that size and catch limits as well as a closed season (April to August) are needed to protect it from over harvesting. 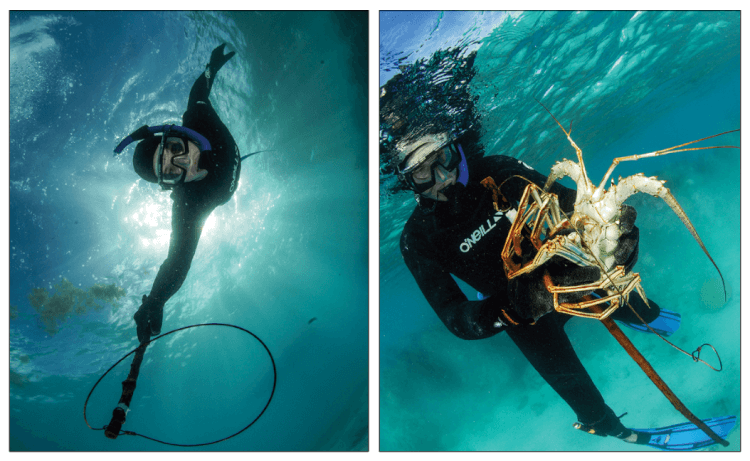 The Spiny Lobster is surrounded by myth, some of which may be related to its long and arduous life history. In Bermuda, spiny lobster mate mid-April to mid-May, and in June egg-bearing females move to the edge of the reef platform (50-100meters below sea level) to spawn… Of around the one million eggs which each female releases, only a handful survive these four years of odyssey and metamorphosis to close the reproductive cycle. Although scientists assume that the phyllosoma stage must develop offshore and take as long as a year or two, some local fisherman insist that in the olden days, when female lobsters could legally be held in inshore ponds during spawning season, there was always a surfeit of small juveniles.

The most intriguing aspect of spiny lobster behavior is their tendency to get together and migrate in single file, nose-to-tail, into deeper waters. Initially suspected to have to do with reproduction, this mass exodus, which usually happens after the first autumn storm, is now seen as akin to bird migrations, a move to get away from the cold and stormy winter conditions in shallow water. And why do they follow one another? Like racing cyclist: to reduce the drag.

Fisherman had, of course, known about these lobster/walks for centuries, long before scientists got wind of it. Maybe they also know about lobster recruitment. Maybe scientists ought to listen to fisherman a little more patiently, and carefully. Although they seem an unruly lot at times, being thee proud survivors of our human heritage of hunting and gathering, their intimate knowledge of the ways of creatures and tides continues to be a vast untapped resource.

A Traditional Bermuda-style Broiled Lobster served with a baked potato and boiled vegetables photo taken at Bermuda Bistro at the Beach, 103 Front Street

NOTE FROM THE AUTHOR: Local chefs take great pride in outdoing each other with their recipes for Lobster dishes. This friendly culinary battle has helped to establish Bermuda Lobster as the specialty of the island’s restaurants from 1 September to 30 April. Families guard their own recipes and techniques for cooking and preparation and these are handed down form one generation to the next.